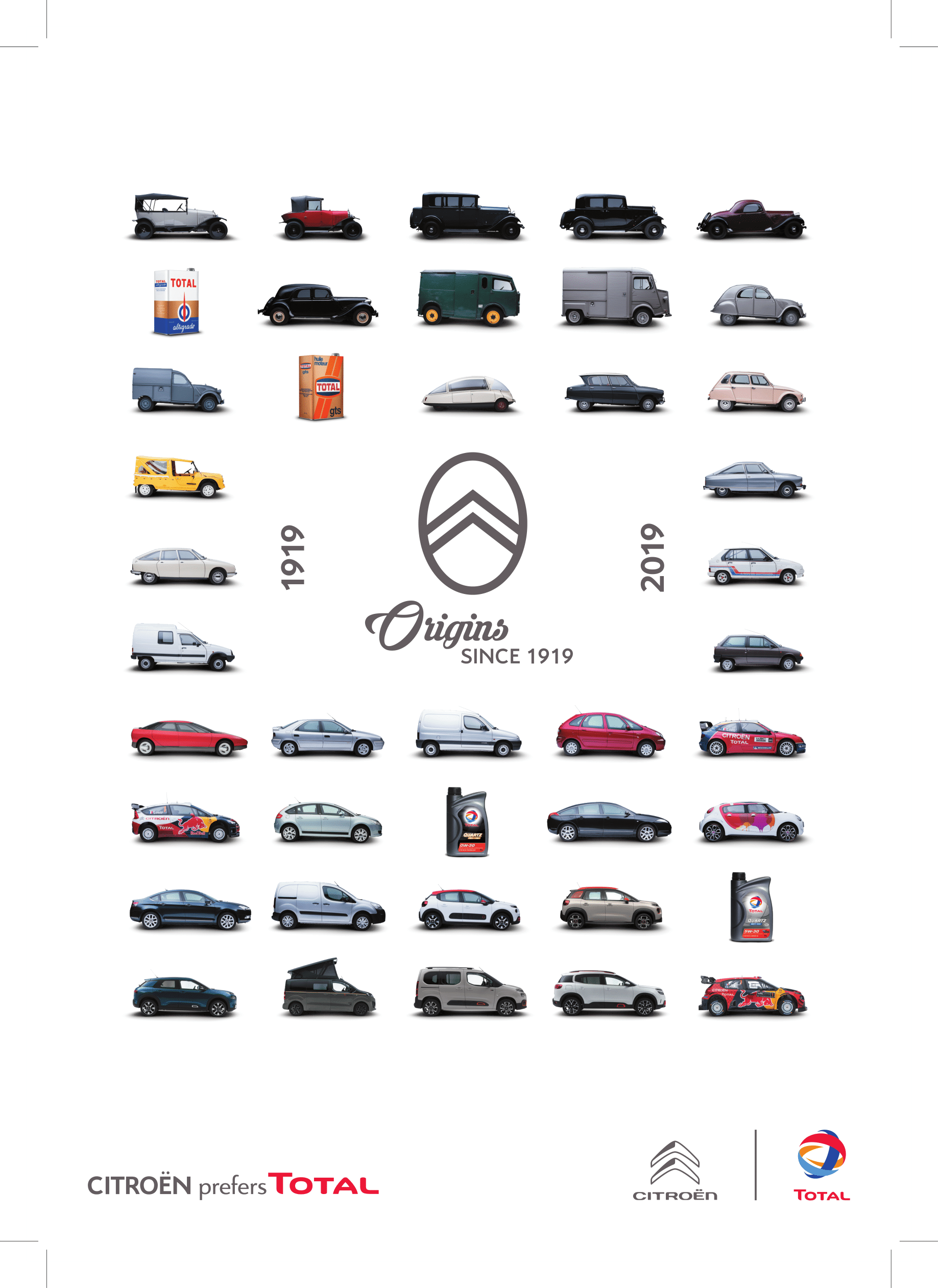 Paris, 24/07/2019 - Total is delighted to wish its longstanding partner Citroën a very happy hundredth birthday. The French carmaker with the distinctive double chevron logo can look back on a century of innovation and an exceptional manufacturing history — and a partnership with TOTAL that has lasted for over 50 years.

Citroën uses TOTAL lubricants both as factory fill for its entire range of vehicles and sells them in its dealership networks. Everyone knows the slogan, “Citroën prefers TOTAL” after more than five decades spent brainstorming and advancing together in pursuit of the same goal: developing the best products for the best cars.

From Racetrack to Road

Together, Total and Citroën have written some of the most exciting chapters in motorsports history, beginning with the celebrated Dakar Rally, which they won four times between 1991 and 1996. Since the 2000s, Citroën and Total stand out in WRC with nine world titles between 2004 and 2012 and the hundredth victory of the Citroën Total World Rally Team in this championship a few months ago.

This unstinting commitment not just allows the two brands to capture titles the world over, it also enables their engineers to collect a wealth of data that is subsequently used to develop new technologies and products for consumers.

Mathieu Soulas, Vice President, Lubricants at Total, stated: “We are delighted to have a special place at the centennial celebrations of our longstanding partner Citroën, whose technological innovations have made a deep imprint on the auto industry. Our respective brands have always focused on excellence, and this is reflected in our outstanding achievements in motorsports. Long live the pioneering innovation mindset that will enable us to tackle the fresh challenges facing the car manufacturing industry together.”

About the Marketing & Services division of Total

The Marketing & Services division of Total develops and markets products primarily derived from crude oil, along with all of the associated services. Its 31,000 employees are present in 109 countries and its products and services offers are sold in 150 countries. Every day, Total Marketing Services serves more than 8 million customers in its network of over 14,000 service stations in 62 countries. As the world’s fourth largest distributor of lubricants and the leading distributor of petroleum products in Africa, Total Marketing Services operates 50 production sites worldwide where it manufactures the lubricants, bitumen, additives, special fuels and fluids that sustain its growth.

Total is a major energy player, which produces and markets fuels, natural gas and low-carbon electricity. Our 100,000 employees are committed to better energy that is safer, more affordable, cleaner and accessible to as many people as possible. Active in more than 130 countries, our ambition is to become the responsible energy major.

This press release, from which no legal consequences may be drawn, is for information purposes only. The entities in which TOTAL S.A. directly or indirectly owns investments are separate legal entities. TOTAL S.A. has no liability for their acts or omissions. In this document, the terms “Total” and “Total Group” are sometimes used for convenience where general references are made to TOTAL S.A. and/or its subsidiaries. Likewise, the words “we”, “us” and “our” may also be used to refer to subsidiaries in general or to those who work for them.

This document may contain forward-looking information and statements that are based on a number of economic data and assumptions made in a given economic, competitive and regulatory environment. They may prove to be inaccurate in the future and are subject to a number of risk factors. Neither TOTAL S.A. nor any of its subsidiaries assumes any obligation to update publicly any forward-looking information or statement, objectives or trends contained in this document whether as a result of new information, future events or otherwise.